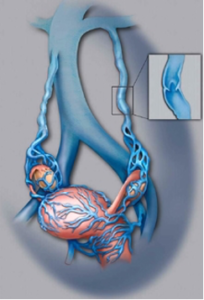 So, what does chronic pelvic pain in women have to do with venous disease and varicose veins?  A lot actually.  The issue comes up frequently in clinic and I thought this might be a good time to address it. Not infrequently, while discussing the symptoms associated with varicose veins in the lower extremities, a number of female patients will remark on chronic pelvic pain as well, or perhaps note how with leg elevation they not only note relief of leg pain, but also pelvic pain.

Up to one-third of all women will be affected by chronic pelvic pain in their lifetime, defined as persistent pain perceived in the pelvis, ongoing for at least six months and non-cyclic (not related to menstrual periods) in nature. While endometriosis is the most common cause of such pelvic pain, Pelvic Congestion Syndrome, (PCS) is actually the 2nd most common cause of such chronic pelvic pain, typically affecting up to 1/3 of women with complaints of chronic pain, while remaining rather little known and poorly understood.

PCS is related to abnormal enlargement of the veins in the pelvis associated with the uterus and ovaries, which put pressure on the pelvic structures and result in dull aching pain and pressure in the pelvis, typically worsened with standing and relieved with lying down and present even between menstrual periods.  The enlarged veins may lead to bladder or bowel irritability and is often associated with deep pain or discomfort during or immediately after intercourse.

In a percentage of cases, the enlarged and what are essentially varicose veins in the pelvis remain enlarged due to excessive stretching of the blood vessel wall and hormonal changes with pressure symptoms persisting post-partum, with the possibility increasing through multiple pregnancies.  Typically, the varicose veins associated with PCS are predominantly in the front or back of the thigh and often through or across the groin region.  In some cases, pelvic veins will diminish in size, but leg veins will remain stretched and enlarged and pelvic symptoms will resolve while leg pain continues.  In these cases, simple treatment of those leg veins may lead to nice relief of symptoms. Although infrequent, there are some women who develop PCS with no history of pregnancy.  Oftentimes there will be a strong family history of varicose veins or chronic pelvic pain and a strong level of suspicion is needed in discussion with a primary care physician or OB-GYN to encourage referral to a venous specialist.

The diagnosis of PCS is typically confirmed with some combination of ultrasound and advanced imaging, such as MRI to look at the veins of the pelvis.  Occasionally a venogram, where X-ray contrast is injected into pelvic veins can be useful for confirmation.

Treatment options vary and may; of pelvic structures, although there is some controversy to this approach.  There may also be a minimally invasive option in some cases to block the large, dilated veins through a very tiny catheter, utilizing microscopic coils to decrease the size of the veins and relieve symptoms.  This approach has shown significant degrees of relief in up to 80% of women.  Treatment of leg veins is often directed to relieve pressure symptoms or, often more importantly to prevent chronic progressive skin changes.

The key to dealing with chronic pelvic pain and pelvic congestion syndrome is a sense of awareness, in combination with honest discussion with your care provider regarding symptoms and concerns.  Venous problems are very often not just a cosmetic issue but may well be an outward indicator of a more significant and concerning underlying problem.

We Look Forward To Working With You.